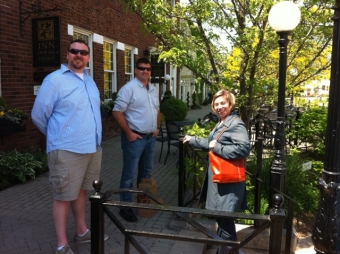 Nicholas Hirons is a simple man who simply loves wine, spirits and  beer.

Nicholas grew up in a family where wine was served every night at the dinner table.  He knew what Claret was before he could confidently tie his own shoe laces and he often accompanied his father to the local pub, where he developed a deep love of a good Shandy, which he continues to enjoy to this day.

Actively involved in the Drinks business since 2004, he finally made the leap in 2009 and went solo with TFB.  Our portfolio is a proud collection of hand selected wines and beer with the mandate of quality,  “Would I confidently drink this at my own dinner table?”

Though dedicated and passionate about Terra Firma Brands, Nick is not all work and no play and always has a little mischief up his sleeve.

He is equally comfortable dining at Michelin starred restaurants as he is at a Grateful Dead or Phish Concert.

He believes that good wine and craft beer should be accessible to all, not just for the connoisseur.

He also believes that one can gain as much, if not more, pleasure from a quality $13 bottle of wine than those highly priced.

That’s not too much to ask for.

Talk to Nick about promoting your brand in Ontario.