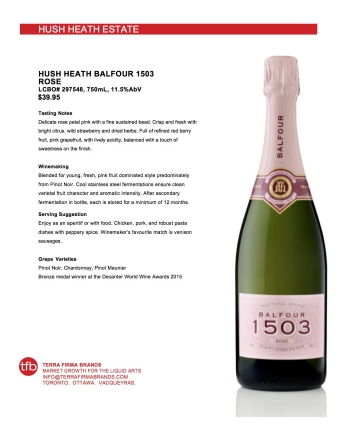 Kent vineyard Hush Heath Estate will send its sparkling wine to Canada after landing a significant deal with one of the world’s largest alcohol buyers.

The contract for Hush Heath Estate came as the Prime Minister Theresa May met businesses and investors in Ottawa yesterday during a trip to strengthen trade ties with Canada.

Hush Heath’s Balfour 1503 Classic Cuvée has achieved a listing with the Liquor Control Board of Ontario (LCBO) through its Vintages Classics Programme, which picks out the world's greatest fine wines and premium spirits.

It is a significant deal for the Tonbridge-based producer as the LCBO is one of the world's largest single purchasers of alcohol and the Balfour 1503 Classic Cuvée will become the first English Sparkling Wine selected for the programme.

Prime Minister Theresa May was in Ottawa for talks with Prime Minister Justin Trudeau on how the UK and Canada can work towards further strengthening their ties to build the closest, freest trading relationship as the UK leaves the EU.

Theresa May also hosted a business roundtable event with major Canadian investors into the UK, using it as a platform to discuss investment opportunities available in the UK.

Prime Minister Theresa May said: “It’s great to see that English sparkling wine has been making a name for itself, not just here in the UK but further afield too.

“I want to see more firms building trade links in lucrative markets such as Canada and the United States and have been using my trip to further strengthen partnerships between our countries.”

The UK’s Department for International Trade (DIT) has been working closely with Hush Heath Estate, supporting their business development and giving them market guidance to help them achieve this export deal.

The wine chosen by the LCBO was also featured at DIT's British Beverage Showcase tasting in July, which promoted newly-listed products to media and restaurateurs.

This listing for the Hush Heath Estate will help to raise the profile of English Sparkling Wine in Canada and help encourage further exporting opportunities and boost culinary tourism.

High-quality food and drink is a burgeoning export sector for the UK and our wine production industry has an ambition to increase exports by ten-fold by 2020.

Richard Balfour-Lynn, producer at Hush Heath Estate, said: "We are delighted that our Balfour 1503 Classic Cuvee has been chosen to be the first English wine available through the LCBO Vintages Classics Programme.

“Hush Heath is a family-owned winery which is at the forefront of Englishwine’s growing reputation for producing first class sparkling wines, and we are very excited to see our wines available in the Canadian market."

Foreign direct investments across a range of projects in the South East have been created 5,432 new jobs in the last year.

The UK is already the second biggest destination for Canadian investment abroad,after only the US.
Our bilateral trade relationship is worth £15.2bn annually to both our economies, with £1.75bn Canadian money having been invested in the UK since March.